In the development of 3D ARVI, many things could not have been done without ANA’s know-how. We interviewed the operations manager, who was involved in the development after collecting and thoroughly examining the opinions of each section of the company.

— What made you decide to work with MTI on this project?

— Regarding the specific utilization scenarios you envisioned, what were some of the challenges you felt in your experience as a flight operation manager?

First of all, it takes some time to get used to weather maps, and I had the impression that it was quite difficult to convey two-dimensional information into three-dimensional information while on the ground providing support when advising a crew flying in three dimensions.
Cultivating that ability requires years of experience and learning different ways of looking at weather information. Aviation weather is difficult, and I felt that it was an issue that would take time to learn because it is very different from general weather and unfamiliar. With this in mind, we thought that if we had something that could be easily understood at a glance, we would be able to convey high-quality information to the crew regardless of their experience level. 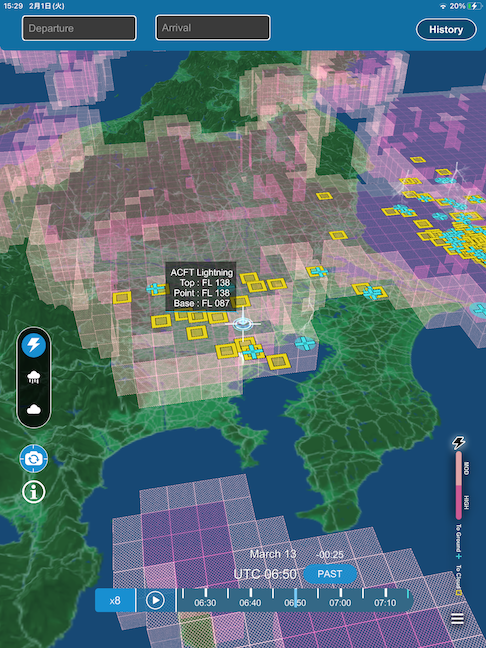 Especially with regard to lightning, we have so-called areal two-dimensional forecasts, but to give advice on how to avoid it based on these forecasts, we need to become familiar with the material. You need to tell them how the forecast was displayed and how it was done, so up until now, it took me 5-6 years of being involved in the business to finally get the general idea, by asking experienced senior staff to teach me or by collecting feedback at crew briefings, such as “this kind of information would be more appreciated” and so on…. It took me about five to six years to get a rough idea of what to expect.

— You mentioned that you feel it is easier to share a common understanding when you see information in three dimensions than in two dimensions.

The crew and our operations managers and support staff have only a limited amount of time to watch the weather, so it is necessary to instantly determine the likelihood of lightning and how to avoid it during the planning stage. Until now, we have mainly responded to information after hearing it at the destination of the flight, but I think it is very significant that 3D ARVI enables us to have an image of what to avoid in advance.

In addition, spatial images assembled from two-dimensional information were in the minds of each individual, but now that they are represented in three dimensions in front of our eyes, we can all see the same thing together, which makes it easier for us to have a common understanding and to talk with each other.
Until now, when I’ve shared my advice with crew members, I’ve been asked questions such as, “What do you see that makes you think that way?” and other questions. This sometimes made the person who received the question uneasy, and I think there were many cases where advice based on personal experience was used to avoid such questions. I think it is more persuasive.

— As one of the planners, what were some of the challenges you faced as a person in charge of organizing various discussions, such as requests from within the company?

We had a lot of trouble deciding which phenomena would be most efficient if they were converted to three dimensions. As the discussion expanded, the most time-consuming and difficult part of the work was the process of narrowing down the common understanding among crew members, ground operations personnel, and operations managers as to what could be best utilized in the three dimensions.
However, we were not bound by any particular restrictions, but rather freely discussed what it would be like to have something like this as we developed the product. It was a great feeling to see something we had envisioned take shape and become a tool that you could actually hold in your hand, something that had never existed before. I think there are still many things that need to be improved, but the Virtual Hollywood Council (*1) was a lot of fun as we worked through the process of creating each of these products one by one. 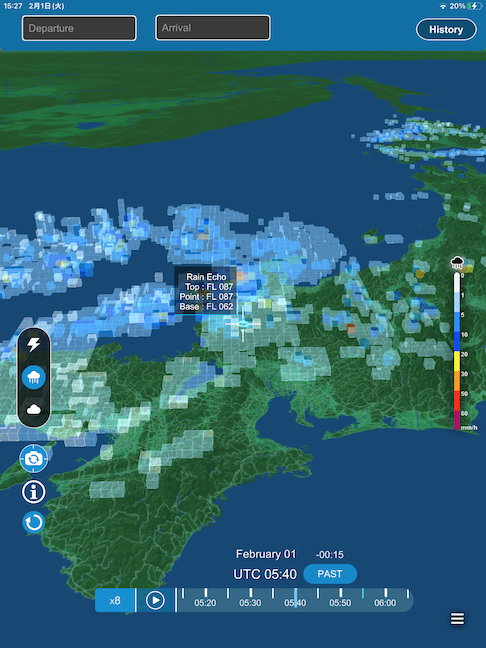 — What did you hear from the pilots and flight control/flight support people?

Crew members have commented that they have more options for avoidance. The introduction of 3D ARVI has been very good for expanding the perspectives of those who have not utilized vertical avoidance to a great extent. The introduction of 3D ARVI is a very good thing, as it will broaden the perspective of those who have not utilized vertical avoidance much in the past. I think the addition of the vertical direction as an avoidance image will be effective for future lightning protection avoidance.
For example, during summer thunderstorms, when temperatures are higher, vertical avoidance may be effective, so it would be more efficient to fly with attention to this aspect.

— How was your experience working with MTI in the development process?

They were very attentive to our needs. It was wonderful that you were able to immediately put into visible form what we were hoping to have, and that you were there for us.
MTI had studied aviation weather and meteorology on their own by holding study groups, so I did not have to make any special efforts to make them understand my message, which was very helpful. I think they were able to communicate in an easy-to-understand manner without using IT jargon used internally in the development process.

— What are your expectations for 3D ARVI in the future and how do you see it contributing further to the aviation industry?

The current 3D ARVI is dedicated to lightning, but the other phenomenon that would benefit from being seen in three dimensions is turbulence. Of these two phenomena, lightning is a challenge for continuous lightning protection, and turbulence is a problem for injuries. I hope that 3D ARVI will become a tool that can solve phenomena that cannot be confirmed by other weather information or are difficult to confirm. 3D ARVI is attracting a lot of attention in the aviation industry, and I would be very grateful if you could continue to promote the visualization of aviation weather.

Thank you very much for the opportunity to hear about the future of 3D ARVI and how it can contribute to the aviation industry. We will continue to evolve to support safer flight operations in the future.

We spoke with the following people
ANA (All Nippon Airways Co., Ltd.)

1 The Virtual Hollywood Council is a spontaneous employee proposal activity in which members who share thoughts and ideas beyond the boundaries of their companies and operations form a team and engage in activities. It started in 2004 as a place for mutual learning and co-creation with diverse companies and organizations to “utilize diversity, learn from each other, and create organizations and people that continue to create new value.