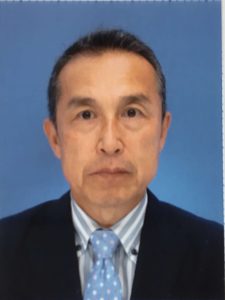 — First, as a basic knowledge, what are the characteristics of winter thunderstorms?

In winter, the cold northwesterly monsoon crosses the Sea of Japan, and because the sea water temperature is relatively high due to the Tsushima Warm Current in the Sea of Japan, cold air advects over the warm sea surface and forms water vapor, which forms clouds. These winter clouds develop as they cross the Sea of Japan and approach land. Just around the coast, cumulonimbus clouds form and spread, bringing winter thunderstorms. During the winter season, satellite images often show organized clouds spreading over the entire Sea of Japan. 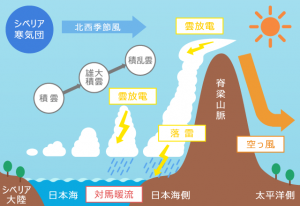 When the winter pressure pattern strengthens, satellite images show white thread-like clouds extending from the continent to reach the coast of the Sea of Japan. These phenomena occur because of the existence of the “Sea of Japan,” and would not occur without the Sea of Japan.

— So is the phenomenon of winter thunderstorms limited to the Sea of Japan?

If you can understand the principle of winter thunderstorms that I mentioned earlier, you can see that this is a phenomenon that does not occur on the continent.
In other regions, Norway has a warm current flowing to the west, which causes similar conditions, and the west coast of Israel has similar conditions due to the formation of cumulonimbus and cumulonimbus clouds when cold air comes in from the Mediterranean Sea. There are also large lakes around the Great Lakes in North America, which can cause similar phenomena, although not on a large scale. There are four or five such locations around the world.

— What are some of the other characteristics of winter thunderstorms?

It’s that the energy as lightning is stronger. This is because the nature of lightning is different from summer lightning. For example, if you look at ARVI, you see the active area of lightning on the Sea of Japan side is wide, right? It extends over 100 to 200 km. 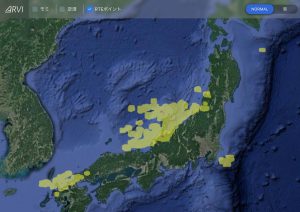 However, summer cumulonimbus clouds are seen in satellite images as small, scattered clouds over the land, and their area is completely different from that of winter clouds. On the other hand, in terms of vertical direction, so-called cumulonimbus clouds in summer develop 10 to 15 km, while thunderclouds in winter are at most 7 to 8 km vertically, about half the distance of those in summer. Winter clouds expand horizontally in winter, while summer clouds expand vertically in summer. Therefore, one of the reasons for the intensity of energy in winter is that the cloud coverage is wider and therefore the amount of charge is greater.

— Where does the electricity come from?

It is believed that the charge is caused by friction between substances in the atmosphere and by the action of water during its phase change (from gas to liquid to solid). This is a microscopic interaction, such as when particles of ice or water collide with each other and separate into positive and negative phases. Friction between materials when they collide with each other is also thought to be possible.
By the way, what happens only with frictional electricity is the blizzard we see in the Antarctic and Arctic. Locally, it is all ice friction. Because the temperature is low, the ice does not move up and down, but moves back and forth from side to side near the ground, colliding with the ice and splitting it into positive and negative. As an aside, volcanic lightning is caused by the same frictional electricity, but is in principle quite different from the electrification within summer and winter thunderclouds.

Another feature of winter thunderclouds is that their altitude is lower than in summer. The height from the ground to the cloud base is at most 300m to 500m, and the layer of accumulated electricity is closer to the ground, so it discharges upward. Winter lightning strikes occur at significantly lower altitudes, so care must be taken during takeoff and landing, and electricity (lightning strikes) is generated as the plane rushes toward the wide area of electrified clouds. 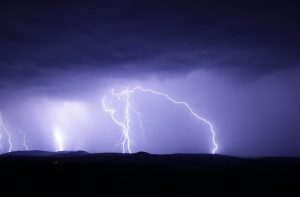 We mentioned earlier that winter thunderstorms have greater energy. Another reason for this is that in summer, the electricity is neutralized by frequent flashing and rumbling, but in winter, this is less frequent and the electricity builds up for a longer period of time. Because the quiet, large buildup of electricity is neutralized with fewer triggers, the amount of neutralizing charge per occurrence is greater, resulting in lightning that is 10 to 100 times stronger in energy than in the summer. Since electricity is invisible, we do not know how much energy is accumulated. Although not qualitative, the cloud area and radar echoes also show a much larger horizontal spread compared to summer. However, it is not easy to determine how much electricity is accumulating over a given area by remote sensing.

— If it is that charged, winter thunderstorm clouds are scary. Where in the spreading cloud would be the most likely point of lightning exposure?

Modern aircraft are made of electrically resistant components, but in the past, there was little knowledge of lightning, and when struck by lightning, the large current could impair the function of additional equipment such as electrical systems and radios, leading to an accident. Also, compared to the past, recent aircraft fuselages are divided into metal and composite material parts to reduce weight, and there are many parts where the two are joined. Of course, even if this is OK in terms of strength, it does not mean that the aircraft will not be damaged by lightning currents. The consensus among airlines is to avoid lightning as much as possible because of the economic benefits of lighter airframes for better fuel economy and the high cost of repairing parts damaged by lightning.

— Thank you very much. By the way, Dr. Michimoto, why did you start researching lightning?

More than 50 years ago, on February 8, 1969, there was a major accident in Kanazawa, Japan, when a Self Defense Force plane struck by lightning crashed into the city, resulting in casualties. As a young boy who had just turned 12 years old, it was a very shocking event that had a great impact on my later career path. This was definitely a trigger for me. There are still many things about lightning that are not fully understood, but I think that lightning is an unpleasant thing for pilots and other aviation-related businesses, so a tool like ARVI is necessary, and I hope that it will grow to become a more useful tool in the future.